According to the latest published homicide data from the Mexican government, there were 3000 intentional homicides and 78 feminicidios from January-March 2020. These are the “Victims of Crime” data published on the 20th of each month. This is the link to the data published on April 20, 2020:
https://www.gob.mx/sesnsp/acciones-y-programas/victimas-nueva-metodologia?state=published
According to this set of data (reported to the SESNSP in the Sec. de Gobernacion by the Fiscalias of the Mexican states) there have been a total of 8585 intentional homicides January-March 2020 and an additional 244 crimes classified as Feminicidios (murders with gender as the motivation).
On average, there are about 97 homicides each day in Mexico, about the same in the first quarter of 2020 as the 2019 average. (posted below).
The SESNSP document entitled: Víctimas de Delitos del Fuero Común: Instrumento para el Registro, Clasificacion y Reporte de Delitos y las Víctimas CNSP /38/15  includes the numbers of crime victims for all of the Mexican states + the national data. According to the description of the data, “The figures refer to the number of victims registered in the investigation files initiated by the Agencies of the Public Ministry and reported by the Attorneys General and Fiscalias of the 32 federal entitites (Mexican states), and these are the offices responsible for the veracity and currency of the data. ” The most current data for January-March 2020 was published on April 20, 2020.
People will certainly be looking for any significant changes in the data that will be published in May (for the months January-April) to determine whether or not the COVID-19 pandemic will have an impact on the overall criminal violence in Mexico, or rather, if there will be an decrease in homicides.
If the monthly figures for Ciudad Juarez are any indication, the city is increasingly violent in April, along with the new death toll from the virus. So far in April, there have been more than 125 murders in the city. According to the official COVID-19 statistics published on the El Diario front page https://diario.mx/  there have been 42 deaths from the virus in Juarez and 1,221 deaths nationally in Mexico.   molly molloy, mollymolloy@gmail.com 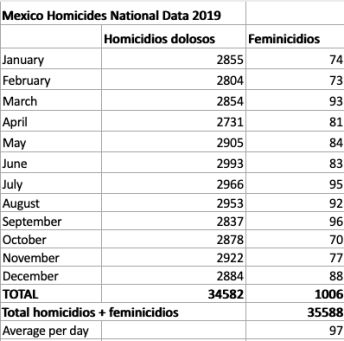