Emilio Gutierrez’ asylum case and appeal may actually draw much needed attention to the capricious (better word? wrong, illogical, lazy, badly argued?) nature of the decisions issued by hundreds of immigration judges every day in courts across the US.  Judges who never give any public statements or interviews about their decisions.

Most of these judges’ decisions are never appealed because the asylum seekers have no access to attorneys who can use the law to write a principled argument to challenge the original decisions. Many asylum seekers (like Emilio Gutierrez and his son) spend months or years in prison (what immigration detention looks like and feels like and operates like) waiting for decisions on their cases. Many give up at the prospect of months or years MORE detention (prison) while waiting for a decision on their appeal.  And go back to the places where they were tortured and/or threatened with death. And try to stay alive in hiding.

The president and attorney general of the United States over and over paint immigrants and asylum seekers as criminals who deserve prison and expulsion from the US. These executive pronouncements influence attorneys within the Department of Homeland Security who prosecute asylum seekers in immigration courts. These attorneys seldom have any evidence to actually challenge asylum seekers’ claims under US and international law, but rather, they simply try to portray them as imposters, liars, and fakers. Immigration court contorts the principle of “innocent until proven guilty,” and rather requires that the asylum seeker PROVE that he/she is NOT a liar, in order to prevent the US government from sending them back to the place and situation that terrified them into fleeing and asking for protection in order to save their lives.  Few Americans realize that most asylum seekers have never broken a law anywhere, but have come to the border of the US to ASK for protection from a criminal-political system in a country that uses state authority to persecute them.
(In homage to Arthur Miller and to the work of the late Charles Bowden):“ATTENTION MUST BE PAID.”
https://archive.nytimes.com/www.nytimes.com/books/00/11/12/specials/miller-attention.html?oref=login
molly molloy
https://www.usatoday.com/story/opinion/2018/04/23/donald-trump-should-help-mexican-journalist-emilio-gutierrez-soto-column/540374002/

Trump pardoned a perjurer. How about helping a Mexican journalist who told the truth?

Donald Trump just pardoned a perjurer. How about helping get asylum for an endangered Mexican journalist who reported the truth about corruption? 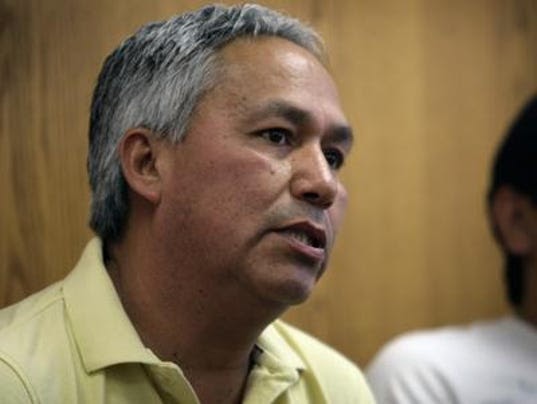 President Trump recently pardoned Lewis “Scooter” Libby, the one-time White House aide convicted of lying to the FBI and trying to obstruct its investigation into the outing of a CIA agent. “Hopefully, this full pardon will help rectify a very sad portion of his life,” Trump said.

To forgive is divine. But while the president is in the mood, he might consider a far more deserving candidate.

For the past four months (at a cost to the taxpayers of some $250 a day), Immigration and Customs Enforcement officials have been holding Emilio Gutierrez Soto and his 24-year-old son, Oscar, in an El Paso, Texas, detention center, despite pleas for their release from the local Catholic bishop and many journalism organizations. One of them, the National Press Club, last year honored Gutiérrez and his fellow journalists in Mexico with its John Aubuchon Press Freedom award.

On Monday, the government is scheduled to respond to a writ of habeas corpus, filed by Rutgers University Law School’s International Human Rights Clinic and supported by 20 press organizations, that aims to free the two men.