The SESNSP (Secretariado Ejecutivo del Sistema Nacional de Seguridad Publica), a division of the Secretaria de Gobernación, released the latest homicide statistics reporting the number of victims of homicide (and other crimes) from January-November 2017. See: http://secretariadoejecutivo.gob.mx/incidencia-delictiva/incidencia-delictiva-victimas.php

Below is a summary of these statistics as well as the official numbers provided by Mexican government agencies from 2007-present. Several tables from the SESNSP website are included below. The full report is online: http://secretariadoejecutivo.gob.mx/docs/pdfs/victimas/Victimas2017_112017.pdf

The SESNSP REPORTED A TOTAL of 2,595 intentional homicides (homicidios dolosos) in November 2017. This is down slightly from the number of 2,773 reported for October 2017. According to the SESNSP data on the number of crime victims this year, there were a total of 26,573 victims of intentional homicide from January-November 2017. This total represents an average of more than 2,400 victims per month (79 victims per day), thus it is very likely that the year 2017 will end with a total of nearly 29,000 homicide victims. Considering the average number of homicides each month and the fact that homicides have increased during the second half of the year, it is nearly certain that 2017 will surpass the total number of homicide victims (27,213) in 2011 and 2017 will be the most violent year in recent history in Mexico.

If we add the estimate of more than 30,000 people reported missing/disappeared as reported by Mexican government agencies and civic groups, then the number of people killed or disappeared since 2007 is likely greater than 265,000. See:

The latest report covers numbers of victims through November 2017:

Below are screen shots of several charts for 2017 from SESNSP January-November:

[As noted below the tables, “these data are provided by and updated on a monthly basis by the Attorneys General and Prosecutors’ offices in the 32 Mexican states.”] 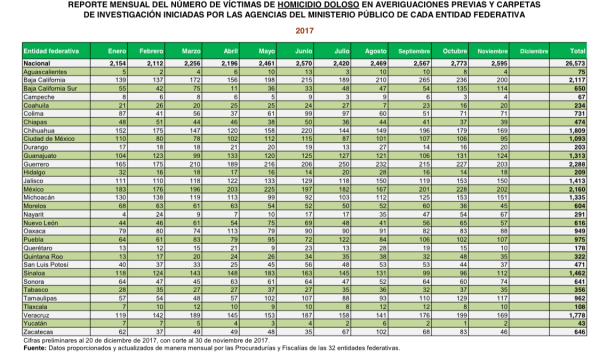 The table below provides total homicides reported for the previous four “sexenios” (presidential terms). President Enrique Peña Nieto’s term began in December 2012. Homicides decreased slightly during the first three years of his term, then increased steadily after 2015 (see table above). If the trend continues, EPN’s sexenio (which ends in Dec 2018) will probably be the most violent in terms of total homicides. To more accurately compare these trends over time, it will be necessary to calculate the murder rate (#homicides per 100,000 people).

For an older and more detailed explanation of Mexican homicide statistics during this period of hyperviolence, see:

http://smallwarsjournal.com/jrnl/art/the-mexican-undead-toward-a-new-history-of-the-%E2%80%9Cdrug-war%E2%80%9D-killing-fields     The Mexican Undead: Toward a New History of the “Drug War” Killing Fields